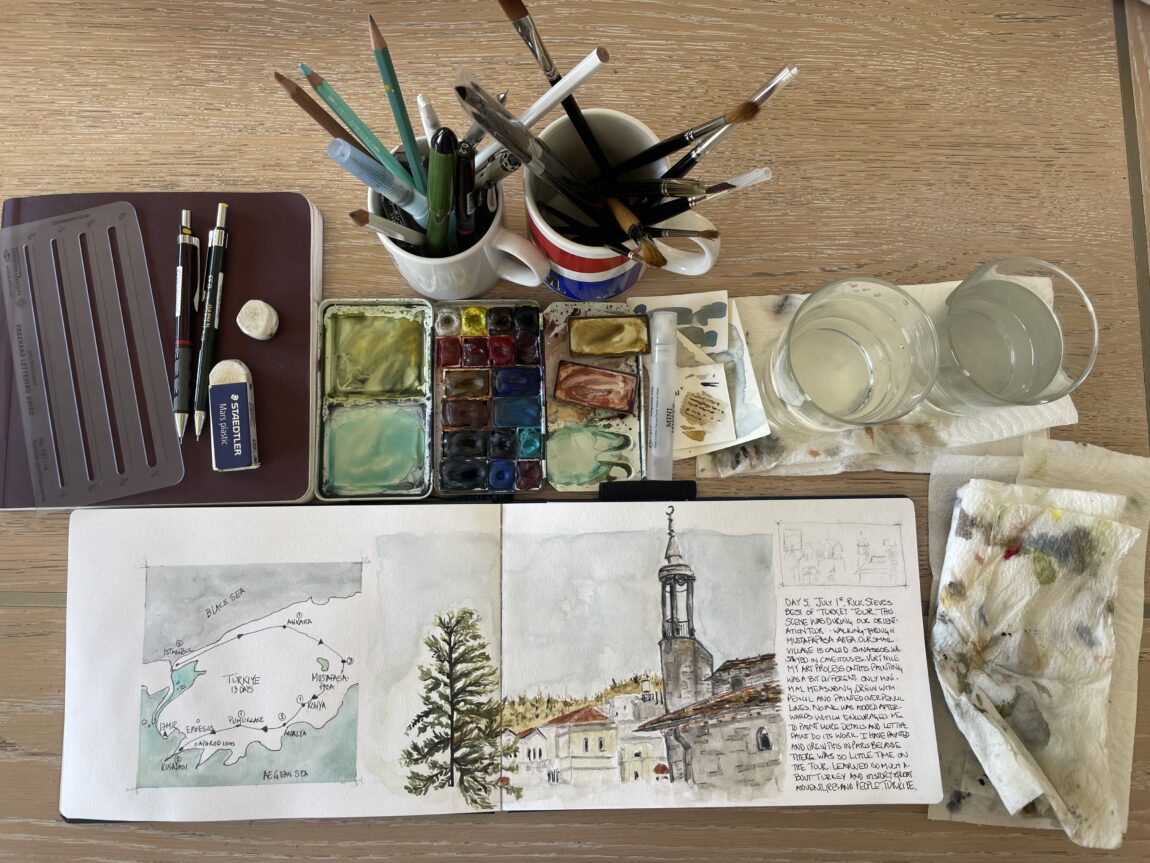 Kelly working to capture her vision of Turkiye
Destinations

Locals, clerics, bikinis and bourbon, week two of our travels across Turkiye. 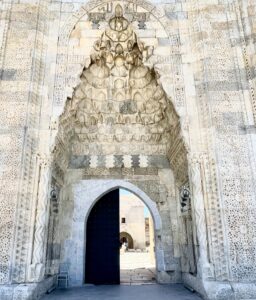 A caravanserai, a medieval truckstop on the silk road

When last we talked Kelly and I were ballooning across Cappadocia.  Our landing was uneventful except when the crew popped two bottles of the local sparkling wine and served up mimosas for all.  While touring in Cappadocia 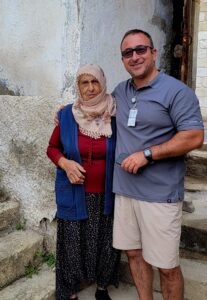 Mert arranged a home visit with his local friend, aunty Fahriye.  As we sat on beautiful turkish rugs she had woven, Fahriye answered questions about her life in a small Turkish village.  We were gathered in the home she had lived in all her life, the home in which she was born and where her mother was born.  She talked and laughed about her arranged marriage and the husband she had lost years ago.  Her story mirrored many from small town America with children moving to the big cities, no one wanting to follow the old traditions or do the hard work of life in a small town. She would like her children and grand children to live under her roof as she did with her parents.   Fahriye lives a simple life and is doing well with her land holdings which have allowed her to pay for the private education of her children and grand children and recently she took in a family of Syrian refugees. If you think the US has immigration issues look at the refugees Turkiye has taken in from Iraq and Syria.  Farhiye has seen some resurgence in her home town as wealthy city dwellers buy up property in trendy Cappadocia for vacation homes and rental properties.  Tourism has brought back many jobs but she still laments the changes to her hometown and culture. A fascinating afternoon. 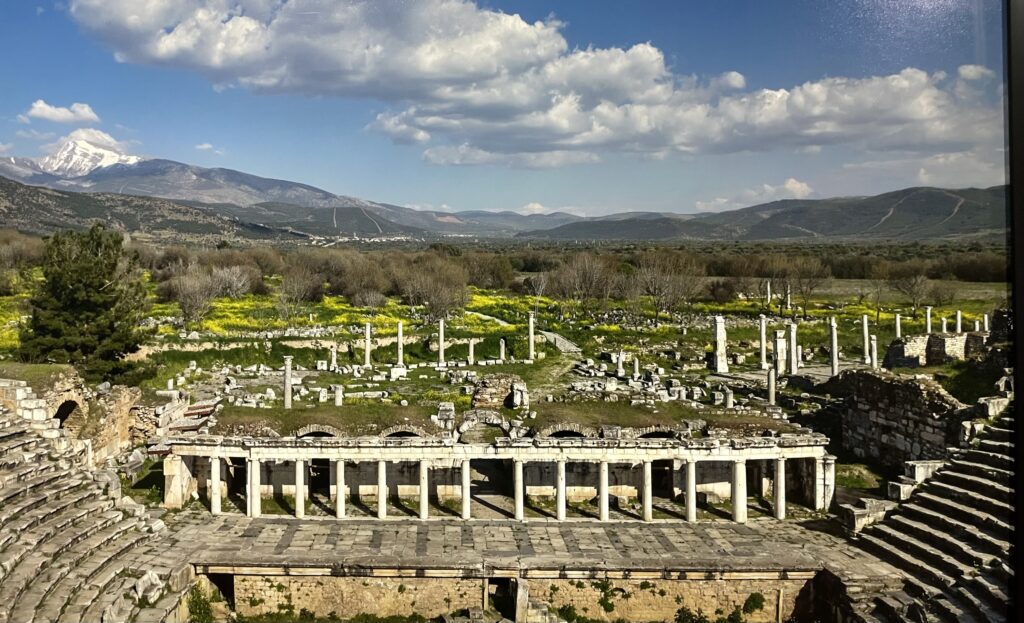 After 3 nights in Cappadocia we continued our journey across Turkiye.  Travel days generally include 3-5 hours of bus travel.  Bussing for hours is never a trip highlight, luckily our 50 person bus gives our group of 22  a chance to spread out.  We stop every hour or two for bathroom breaks, lunch or sight seeing and during our ride Mert will oftentimes entertain us with lectures on topics like the history of our upcoming stop, politics, international relations, Turkish views on NATO and the EU, or maybe a bit of Turkish pop music. 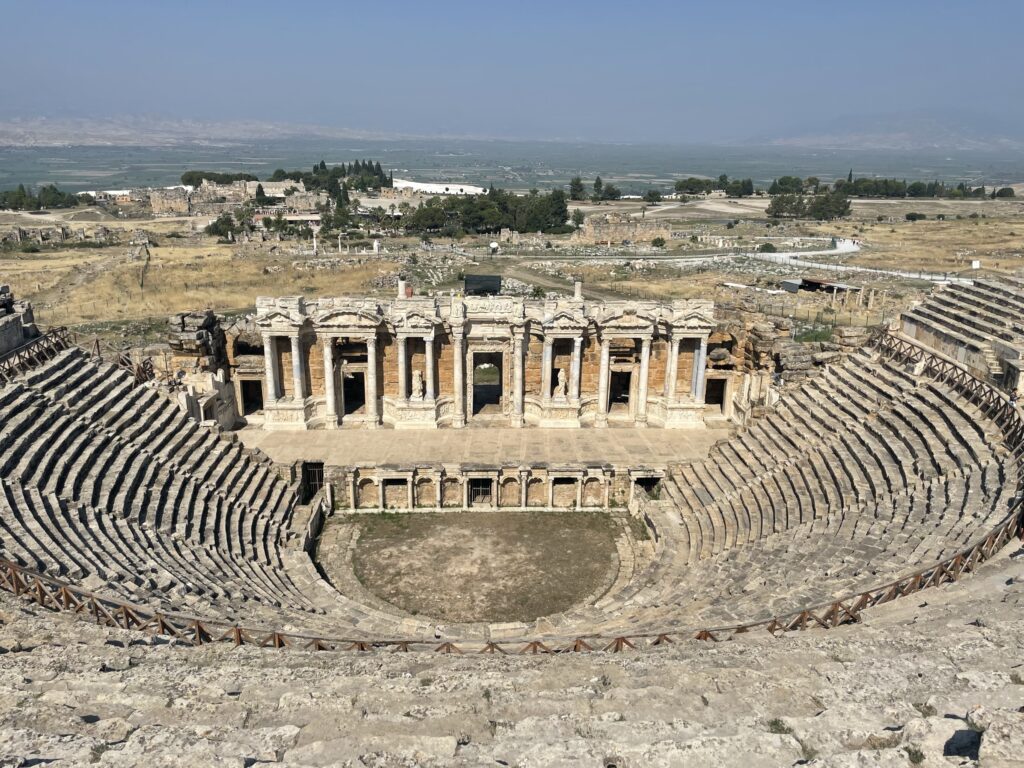 The theater at Hierapolis

Our next stop was Konya, a little village of about 2 million people with centuries of history and currently a major agricultural and manufacturing center.  Almost every major auto manufacturer builds cars in Turkiye for sale throughout Europe and Mercedes just opened a big truck plant in Konya.  Low wages, the youngest population in Europe and high levels of education make Turkiye very popular with manufacturing conglomerates. 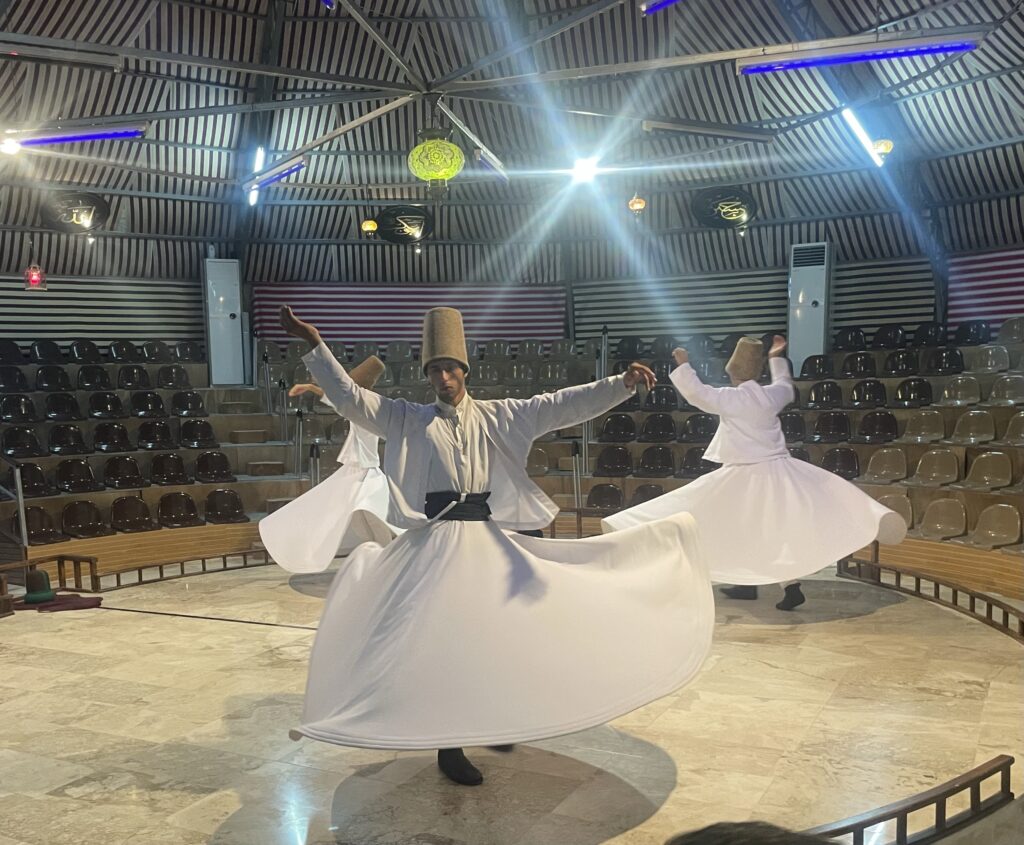 Konya is known to be one of the most conservative cities in Turkiye so we made a quick stop before our arrival to pick up wine and beer which is hard to find in Konya.  We were then able to gather for happy hour drinks in our hotel rooms before dinner.  The Turks poke fun at Konya by naming a popular beach in  Antalya the Konyaalti beach or the “not Konya“ beach where you will find plenty of bars and women in bikinis.  In Konya we had a sit down Q&A session with an Imam.  A very nice, soft spoken young man who gave up his corporate life to become a religious cleric.  We learned a bit about Islam and their holy books which include the Koran the Torah, Psalms and Revelations.

The coast of Antalya

What I found more interesting was how Turkiye manages its religion.  Mosques are built by community donations but all clerics are government employees.  Clerics are forbidden from taking money from their congregations and clerics are moved between congregations every seven years.  Additionally, the weekly sermon topics are handed down by the central ministry of religion.  I am sure some see this as government religion but others see it as reasonable government control of religion, a cleric who gets a bit too radical may find himself without a job or a congregation.  The system doesn’t just apply to muslims but also catholic and orthodox christian churches as well. 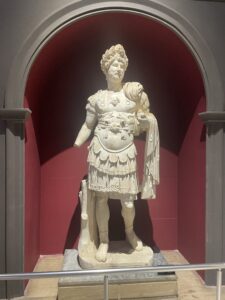 Looking good for his age

Konya is also famous as the burial site of Rumi, the 13th century islamic poet, mystic, theologian whose teachings of peace, love and tolerance are still popular around the world today among the religious and non-religious alike.  Rumi’s followers are also known for their whirling dervish meditation.

After conservative Konya we were off to the beach town of Antalya on the Mediterranean coast.   While only one beach is called Konyaalti, the entire city could be called the Anti Konya. It was a bit like traveling from a dry Utah town to Venice beach California.  The cultural difference is palpable. I call it a town because the old core is very compact and walkable but Antalya itself is home to about 2 million and visited annually by over 15 million travelers looking for fun in the sun.   Antalya  proved to be my favorite Turkish city with a great combination of old town center with bars, restaurants and shops, great swimming beaches and a wonderful archaeological museum.   We took a boat ride along the coast and dove into the Mediterranean for a relaxing swim.  I could have easily stayed all week. 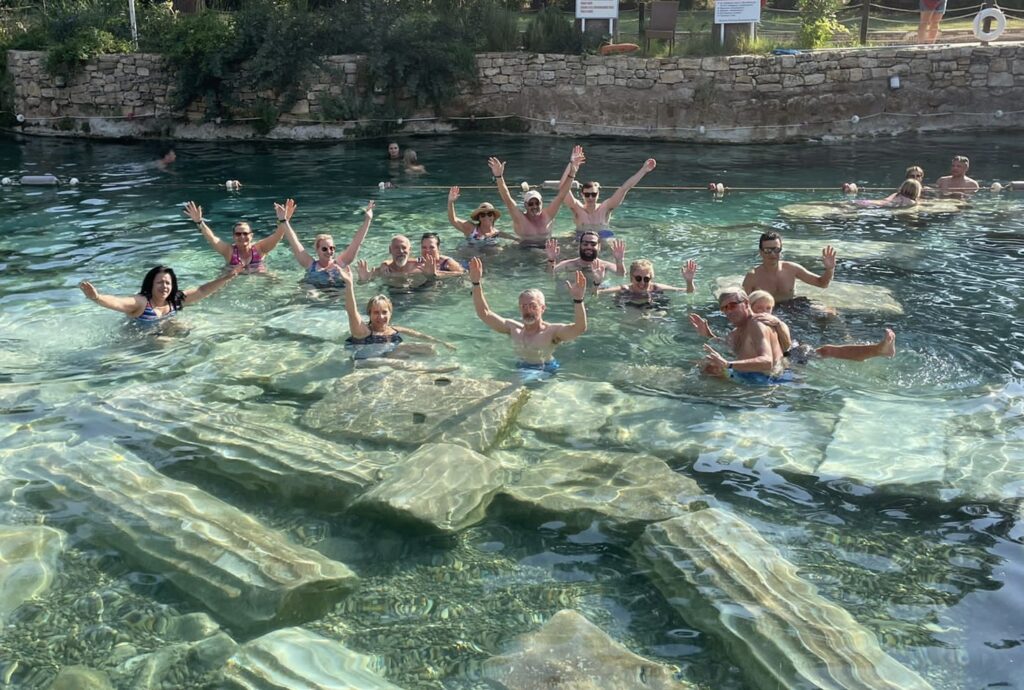 My kind of Turkish bath

In Antalya we were given the option of trying out a real Turkish bath.  Usually the adventurous one, this time I opted out as by all accounts it sounded like torture having  a turkish man scrub and flog you after sweating in a sauna.  I am glad I opted out after hearing the confirming stories and the looks of those brave few men who tried it.  Turks are all about acts of bravery and I think the Turkish bath is another bravery test, much like Mert’s description of his all important circumcision ceremony, at age 6…..without anesthesia. At least these days they use anesthesia so you might actually be able to enjoy the big family party. 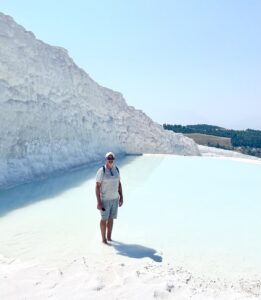 The women’s Turkish bath experience was a different story.  Kelly joined almost all of the women from our tour for the full hammam experience. Sauna, massage, mud facial, and only minimal loofah torture.  All of them raved about it and wished they could do it again, two hours of spa time for only $40.  While Kelly was at the spa I stopped into the liquor store around the corner and picked up a bottle of fine Turkish bourbon, okay, it was Woodford Reserve from the ancient Roman state of Kentucky.  It only set me back $38 and with several bourbon aficionados in our group, including our guide Mert, we enjoyed sipping a little around our hotel’s beautiful grassy courtyard. 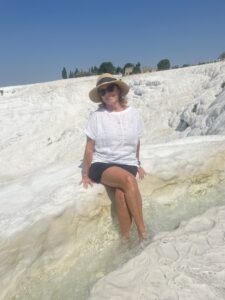 Obviously some of us are better at posing.

After 2 very enjoyable nights in Antalya it was back on the bus and off to Pumakkale, the ancient hot springs resort.  I am sure you are tired of my overuse of the term “ancient” but honestly, what else do you call a hot spring  that has welcomed visitors since 700 BC?  The ruins of the  greek/roman city of Hierapolis surround the hot springs.  Hieropolis only dates back to the second century BC, so slightly less ancient.  It is the final resting place of Marcus Aurelius as well as the apostle Philip.  Judging from the size of the necropolis (cemetery) it is obvious the hot springs aren’t as “healing” as they were advertised.  Healing or not you can swim in the hot springs among fallen roman columns which make it look a bit like a Disney resort experience, though these columns are actually 2000 years old.  You can also wade in the calcified pools after hiking around the city with its well preserved Roman theater. 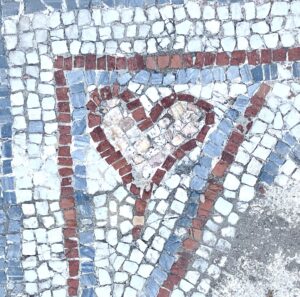 Somethings never change, even after 2000 years

The next day we stopped and explored the Greek city of Aphrodisius with its huge olympic style stadium. Then we continued on to the seaside city of Kusadasi on the Aegean.  Kusadasi is another fast growing Turkish resort town with condos sprouting up everywhere.  Change the language on the signs to english and you would think you were in a Southern California beach community.  Restaurants and bars abound and everyone, including women, are dressed in beachwear.  The prices are a bit higher with cocktails around $7, but a good meal with wine will only cost you around $20 per couple.

Besides sun and beaches the big draw to Kusadasi is the ancient city of Ephesus just 30 minutes outside of town.  Inhabited since 6000 BC (thus qualifying as ancient) Ephesus was a major port city in both Greek and Roman times until a thousand years of clear cutting and erosion turned the port into a lovely fertile valley miles from the sea. 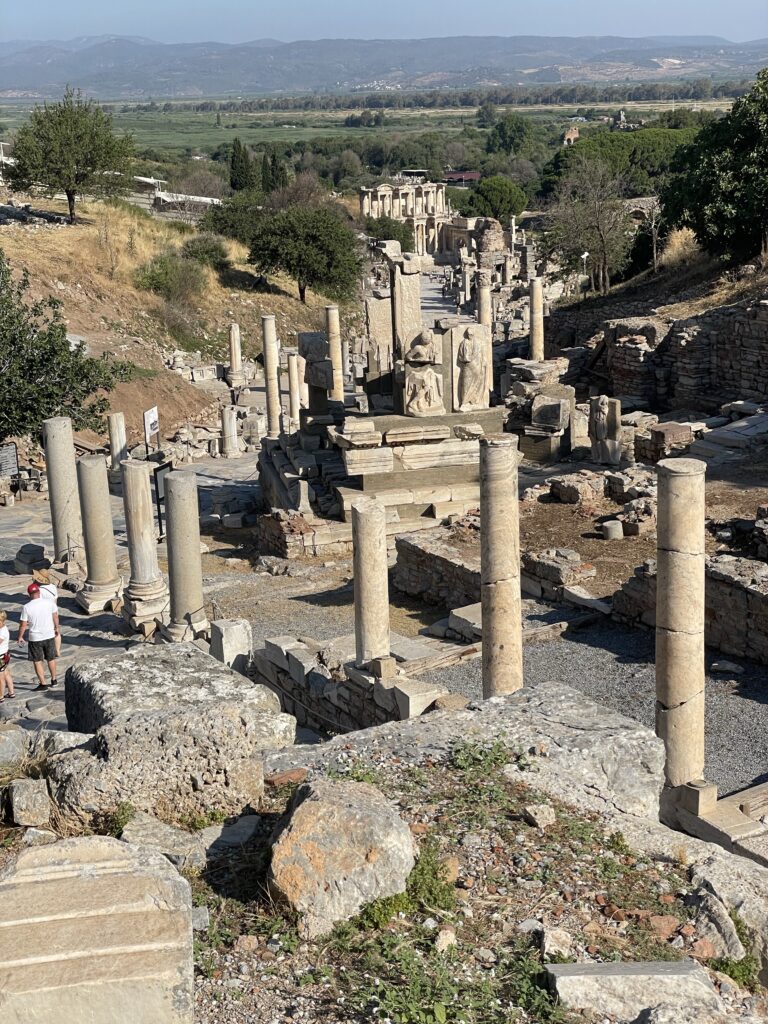 Ephesus in the footsteps of saints, emporers and prophets

The city also has ties to the Apostle Paul, the book of Revelations and  is alleged to be where both Paul and Mary, mother of Jesus, spent their last days.  The ruins of the city are both impressive and extensive, definitely worth a visit.  Make sure you arrive early before the conquering hordes of cruise ship travelers descend upon the city like invaders of old.

After this whirlwind tour of Turkiye and our crash course in all things Turkish it is time to chill in one of our favorite European cities, Paris.  See you there. 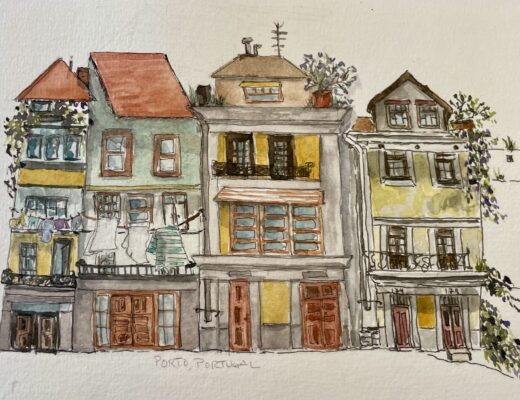 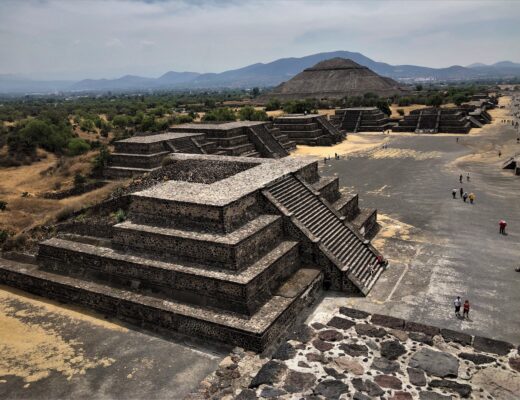 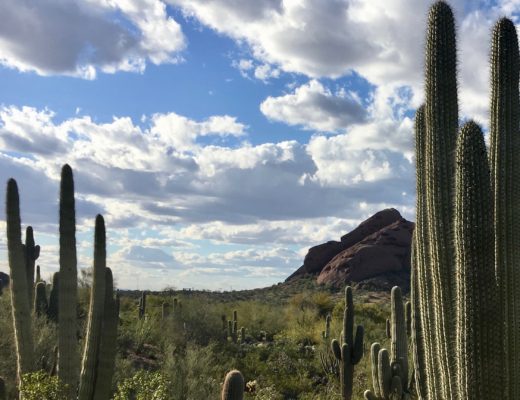 March 16, 2019
Previous Post Turkiye, a wonderful historic country no matter how you spell it
Next Post Our return to Paris