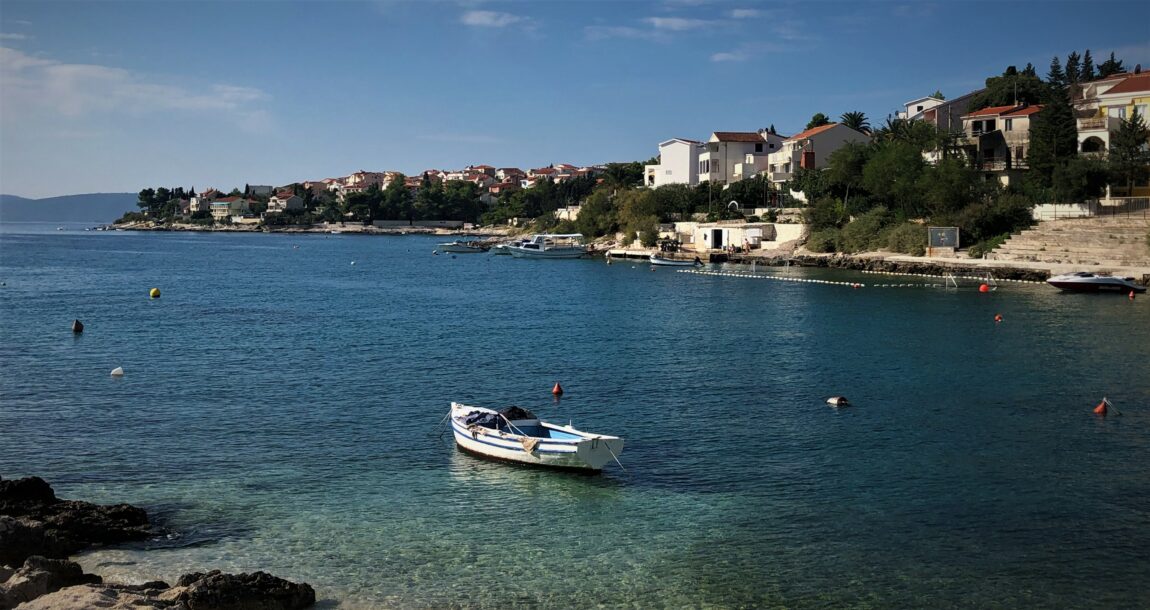 The last days of summer in Croatia contemplating the future

As we wrap up our Europe travel for the year we remain outside Split, Croatia in our seaside apartment.  Our friends Neil and Jin have joined us from Nice, France for few days of touring, relaxing and talk of living abroad. 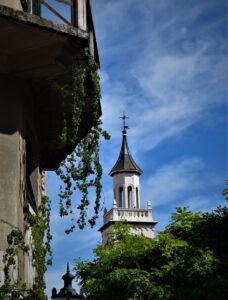 The more we stay here in Croatia the more I like it.  September in Croatia is spectacular.  Daily temps around 80, beautiful clear water, fewer crowds.  As we learn more we find better pricing away from the tourist zones. We took Neil and Jin into Trogir via passenger ferry.  We wandered the streets of the old town, had a very nice lunch and picked up chicken and veggies from the market for dinner back at the apartment.  A great September day.

I must admit, we are looking forward to returning to the Pacific Northwest at the end of the month with family, friends, and the familiarity of life in the US.  Not to mention US football at a reasonable hour.  I could give you several paragraphs on the various options and issues for streaming US television especially US sports here in Europe but even if you make it past those hurdles you can’t change the fact that games played in the US are starting between 10PM and 4AM here.  And I like to sleep between 10 and 4.  The struggle is real.

Later in the week we took the ferry into Split.  Both Split and Trogir can be reached by car from our town of Okrug Gornji on the island of Ciovo but arriving by boat to an historic port city is the absolute best.   Ferries cost $3 to $5 per person so it is comparable with a taxi.  We joined another Airbnb experience in Split, a food tour with a little history thrown in. 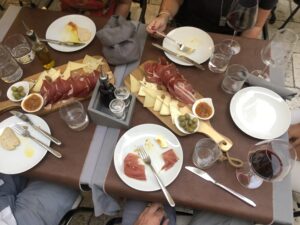 Our guide was Lucija and it proved to be another five star experience.  We were the only ones to signup on this day so we had a private tour of Split, a running commentary on the history and architecture of the city interspersed with four food stops where we sat and enjoyed local specialties while sipping local wine and discussing everything from travel to politics with Lucija, a native of Split and a fantastic ambassador for her City and Country. 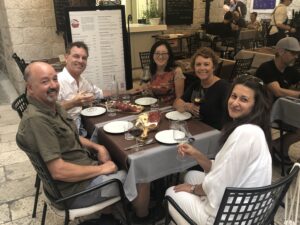 The cost of $92 per person was not cheap but a good value when you account for the food, wine, walking tour and the opportunity to connect with a local.

The first stop was at ”Konoba Korta’‘ where we had prosciutto, goat and sheep cheese , red Merlot , white was Pošip and rose′ Crljenak, all from Korčula island.   Next up was ”Misto Street Food Factory” where we had burgers with pork pašticada and chicken tingul.  Washed down with an herbal grappa called Travarica.  Then it was on to  None where we had Soparnik peasant pie with swiss chard, onions and garlic.  Last was Marul where we had seafood charcuterie with white  Kujundžuša wine from Imotski and homemade gnocchi with red Plavac mali from Pelješac peninsula.  No we couldn’t eat it all but it made a great lunch the next day. 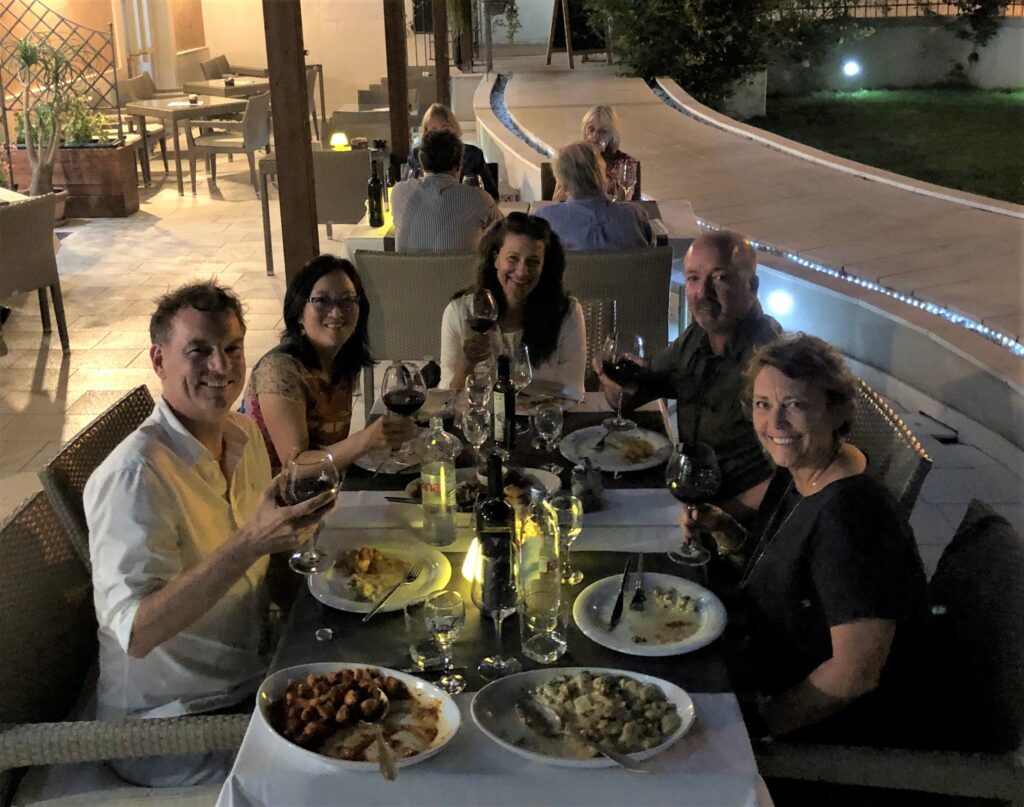 The end to a great evening

As I mentioned before Croatia has a complicated history and Lucija was both optimistic and worried about the future.  In a country that has been possessed by the Romans, the Venetians, the Ottoman Turks, the Austro Hungarians and Yugoslavia with its strong ties to the Soviet Union it is easy to understand her concern for the future of an independent Croatia.  Like many countries it struggles to balance the good aspects of its socialist past while embracing the positive attributes of capitalism.  They have excellent schools and healthcare, homelessness is non-existent but Lucija questions how long this is sustainable in a country with little or no industry and high unemployment.  We did not have any answers for her, heck we could not even explain our own country, but it proved to be a fascinating conversation and quite honestly gave me hope for the future of Croatia and this part of the world.  In our travels here we have had the opportunity to talk with Lucija, Ivan, and Jakov all enterprising young Croatians forging a future for themselves and their country.  If people like them have a say in the future of Croatia it has a bright future. 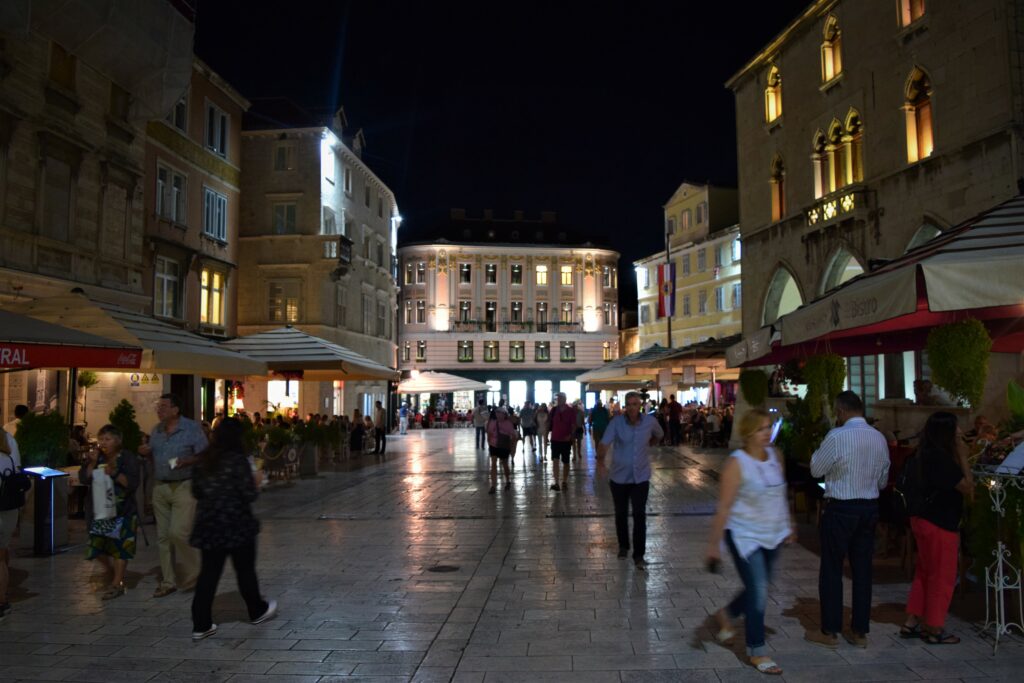 We also enjoy our conversations with Neil and Jin over a beer or glass of wine exchanging notes and ideas on travel and living.  Like us, they have friends and family in the Pacific Northwest.  Unlike us they still own a condo in downtown Seattle.  So why haven’t they moved back?  First, they enjoy the idea of living abroad, at least for now.   Second, when it comes to retiring early, before you are eligible for pensions, social security and Medicare the cost of living is a major factor. 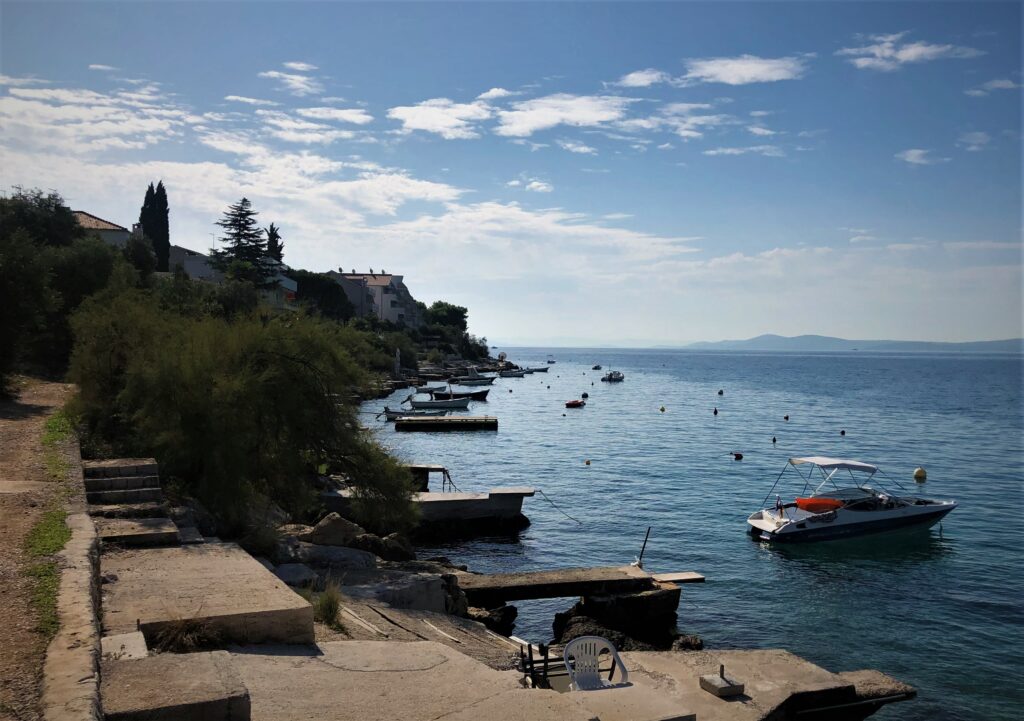 Not a bad place to spend a month

Honestly it is a major factor whenever you retire and your savings and investments last longer in a place where everything is 30% less expensive than Seattle and you can save up to $10,000 a year on healthcare and still receive some of the best healthcare in the world.  So, they stored everything from their condo and turned the keys over to a company that refurnished the apartment for optimal rental value and rents it out on Airbnb.    The lower cost of living gives them money to spend on travel and having a base in France makes it easy and inexpensive to travel all over Europe.  It is also easy to travel back to Seattle which they will be doing in November. 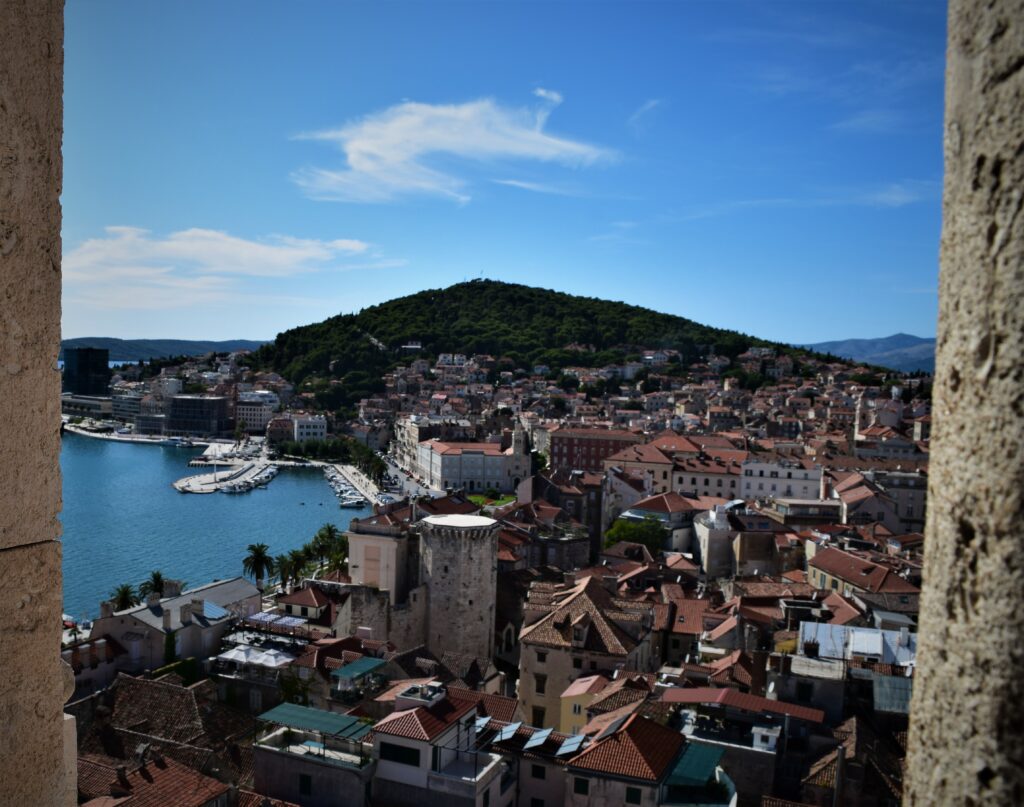 Kelly and I still have more places to see before deciding to settle down or finding a home base.  We will be back in the states for a few months before heading out on the road at the end of the year.  We are anxious to see how Seattle feels after 9 months of travel. 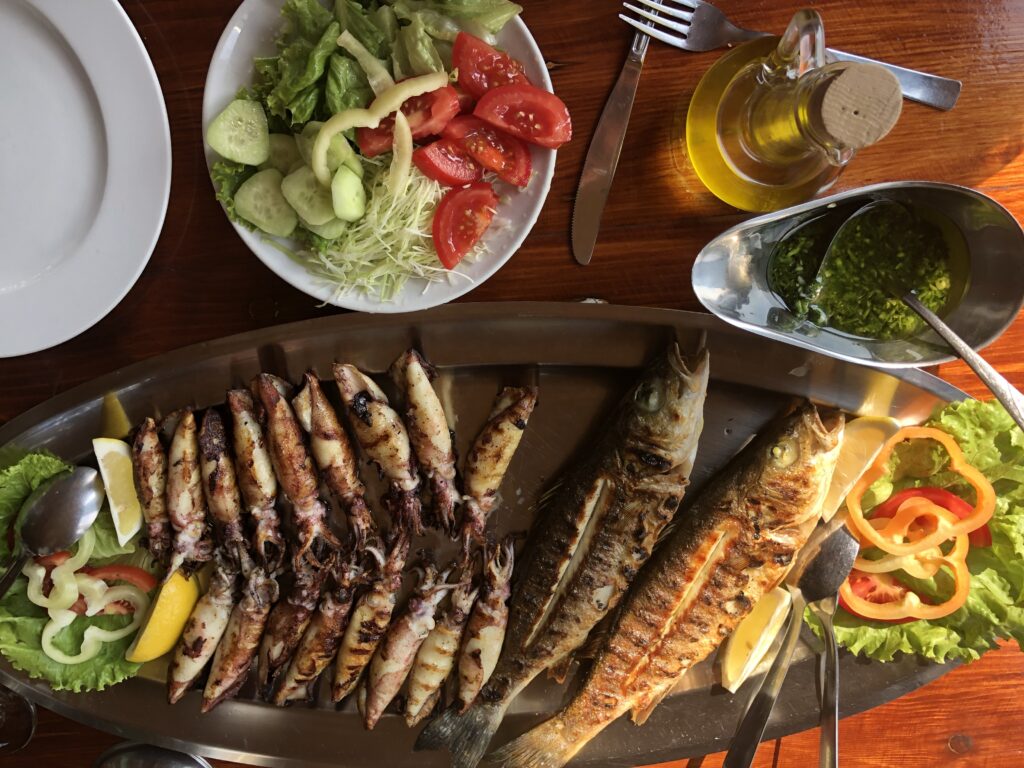 We have learned much about what we like and don’t like about our nomadic life.  We have made no long-term decisions deciding instead to see how life plays out.  One nice thing about this life is the ease of change and the options available to us.  We can live anywhere in the world next month, whether in the US or some far flung locale, we simply need a plane ticket.  If you could live anywhere for a month or two, where would it be? 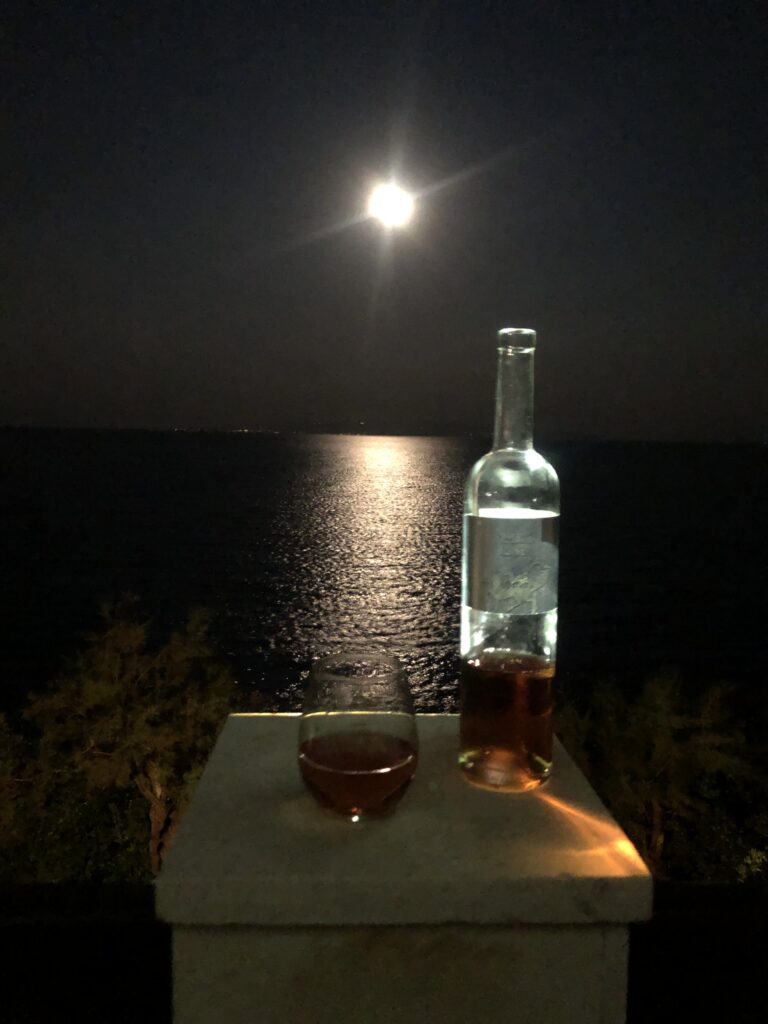 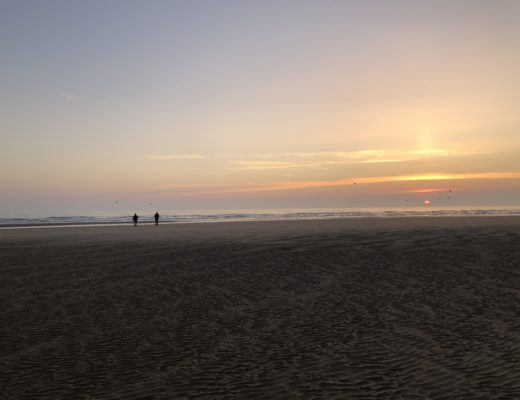 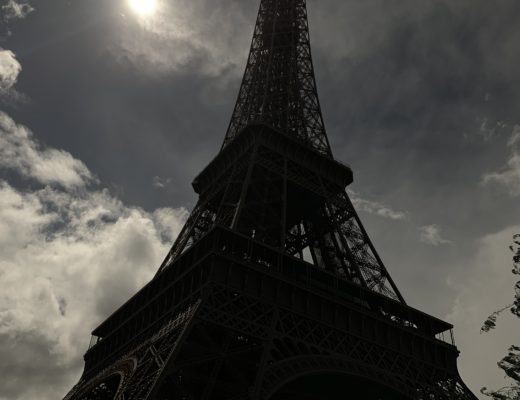 Even a less than perfect Paris is still pretty good 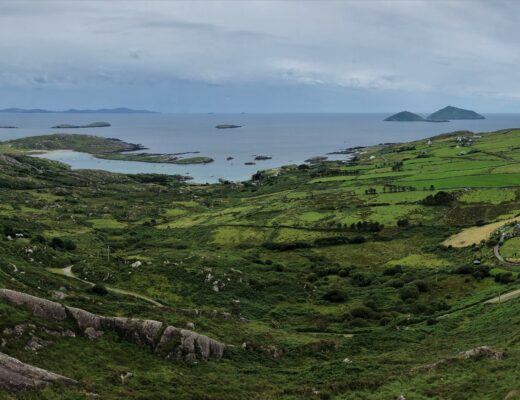 On the Ring of Kerry

Ireland in the rain